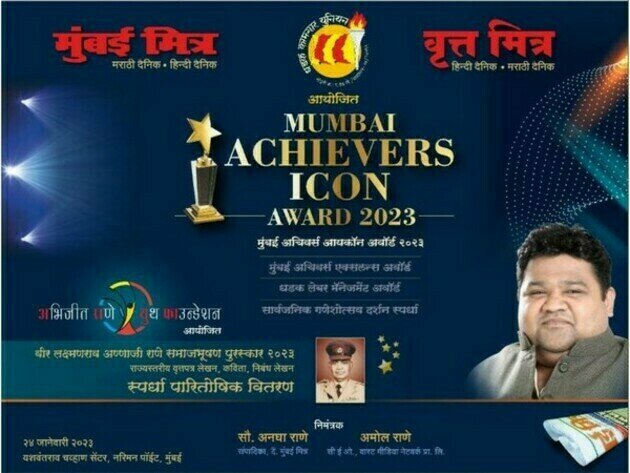 
Mumbai (Maharashtra) [India], January 20 (ANI/PNN): Appreciation and recognition are strong motivators that result in a boost in productivity, and performance. This in turn leads to the growth of our society as well as the nation. A grand awards ceremony of daily publications Mumbai Mitra, and Vritta Mitra is due to be held on Tuesday, January 24, 2023. Prominent labor leader and a well-known name in Marathi journalism, Abhijeet Rane, is the Chief Organizer of the event.

According to Abhijeet Rane, who serves as Group editor of Mumbai Mitra, Vritta Mitra, as well as Founder & General Secretary of Dhadak Kamgar Union, the event is being held to bring together journalists and editors along with industrialists, and women entrepreneurs from different fields, along with social workers, artists, celebrities, actors and actresses.

During the event, apart from bestowing the awards, some special colorful programs will also be held. Renowned artists will display their art in this program which will be held in the presence of prominent politicians, state government ministers and high officials of the administration, film-TV celebrities. Anagha Rane, a well-known poetess, and editor of Dainik Mumbai Mitra will be the Chief Guest at the event.

During the event, several awards will be given in five different categories to various industrialists, businesses, etc., which are as follows:

1) Mumbai Achievers Icon Award 2023: This award will be given to those industrialists who have created job opportunities, and implemented other outstanding initiatives that contribute to the financial growth of the country.

2) Mumbai Achievers Excellence Award 2023: will be given to privately-owned small businesses, NGOs, as well as social workers who have done excellent work in their fields.

3) Dhadak Labour Management Award: This award is being offered through Dhadak Kamgar Union to recognize the efforts of those individuals who have helped grow the union at their own level.

4) Veer Laxmanrao Annaji Rane Samaj Bhushan Puraskar: This award will be bestowed to winners of an annual State Level Competition in which the best Essays, Poems, and Letters that appear in newspapers are considered. The award has been named after Veer Laxmanrao Annaji Rane, Father of Ashok laxmanrao Rane, senior journalist of Mumbai Mitra Newspaper the grandfather of Abhijeet Rane, who was one of the noble souls who fought for the freedom of the country. The award is one of the many initiatives that the 'Abhijeet Rane Youth Foundation' carries out for the welfare and development of the youth of the country.

5) This award is given to winners of a competition that Mumbai Mitra/Vritta Mitra organizes during the festival of Ganesh Chaturthi on a public level. The competition considers the mandals or groups that have done the best decoration of their pandals where they have placed Ganpati idols throughout Mumbai during the Ganeshotsav festival. Abhijeet Rane will bestow the award to the winning mandals for the public Ganeshotsav Darshan Competition-2022.

Vast Media's CEO Amol Rane, says, "We are offering this award to fulfill our duty towards the society."

Abhijeet Rane is a rising star in Marathi journalism, who strives to solve the problems of blue-collar workers with the power of the pen. He is also a prominent labor leader from Maharashtra and a young and dynamic businessman.

A great supporter of blue-collar workers, Abhijeet Rane launched Dhadak Kamgar Union, as a crusade against injustice, exploitation, and malpractices in business, industry, and labor-oriented organizations. Besides Dhadak Kamgar Union, he has also been a pioneer in a number of social initiatives including:

Abhijeet Rane also serves as the Maharashtra State President of the Writers And Journalists Association (WAJA, India), as well as the Chief Executive Officer of VMN Distributors, Abhijeet Associates, and Abhijeet Travels.

It is noteworthy that Abhijeet Rane has himself received several awards for his incomparable efforts to better the lives of the poor blue-collar workers as well as the downtrodden in society. Abhijeet Rane was recognized by the leading PR agency, Times Applaud, as a Covid-19 warrior for his outstanding support to workers in the Film and TV industry through Dhadak All Film Kamgar Sangathana. He was also commended for his dedication and support for medical fraternity workers through Dhadak Hospital Kamgar Union. He was bestowed with the ET Change Maker award last year for his efforts to uplift the poor and downtrodden by bringing a transformation in society. www.dhadakkamgarunion.in