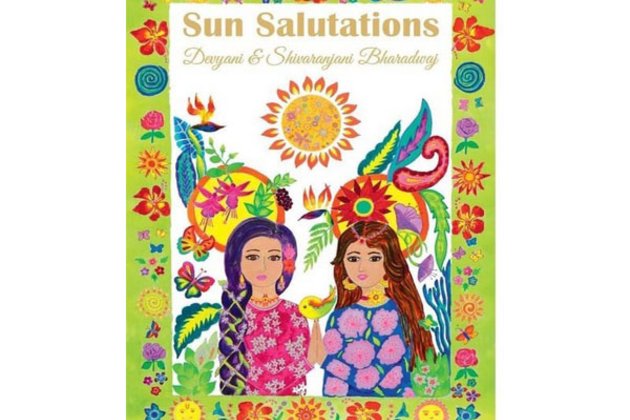 Speaking to ANI, one of the two sisters, Devyani Bharadwaj said, "Both of us sisters used to do Pranayama and Surya Namaskar every morning. It has proved to be very beneficial for us physically. So we thought of writing a book to make it accessible to others, which is now published under the name 'Sun Salutations'. In this book, we have tried to explain yoga asanas to children through trees, plants, and animals and encouraged people to perform yoga.""We sent a painting and a letter to the Dalai Lama, to which he replied in Tibetan. We felt very happy and motivated after his reply," said Devyani.

Another of the twin sisters, Shivaranjani Bharadwaj said, "This is a book on Yoga. When I was young, I used to make small booklets and think that one day I will write a big book. I want to be a writer.""I have been doing yoga with my mother and sister for two years now. We have been learning yoga from yoga teachers. I have learned to paint from my mother. I would like to tell everyone and especially the children that by doing yoga, one receives positivity and peace," she added.

Smita Bharadwaj, the mother of the sisters told ANI that her daughters started writing the book a year back when they were eight years old.

"I and my daughters performed yoga throughout lockdown and realised how beneficial it is for children's physical and mental health. I thought that its benefits should be shared with other children as well," said Smita.

She further said, "Due to lockdown, staying indoors constantly, makes children depressed or frustrated. So it's better that they do something creative. Both the children have won national and international awards in General Knowledge quizzes, online spelling, and painting competitions. I gave painting brushes and pens to my children so that they can express themselves with pictures and words."She said that book has been written in English and is available in French and Spanish languages. The Hindi and Marathi versions of the book will come shortly.