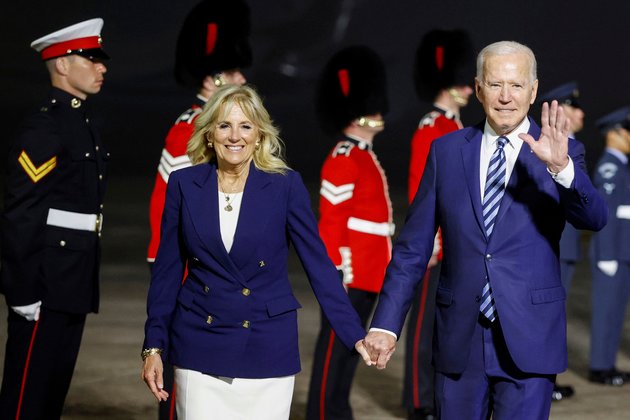 Biden Says US Will Donate 500 Million COVID Vaccines to World

CORNWALL, UK - With Thursday's announcement by U.S. President Joe Biden that his administration is donating 500 million doses of the Pfizer coronavirus vaccine to 92 low- and middle-income countries, the United States aims to liberate itself from the uncomfortable reputation of being a vaccine hoarder.

Biden could not have chosen a more opportune time and place for the announcement - a day before the start of the G-7 summit, a meeting of the world's most advanced democracies in Cornwall, United Kingdom. In doing so, he is setting a high bar for wealthy nations to do the same.

According to the White House, the half a billion Pfizer doses will be delivered by June of next year, including 200 million to be delivered by the end of 2021. The administration said the donation will "serve as the foundation for a coordinated effort by the world's democracies to vaccinate people around the world."

Initially U.S. had pledged for an additional $2 billion for COVAX but is now redirecting the money to help pay for the 500 million donated doses, which has an estimated cost of $3.5 billion.

Biden's announcement is a signal that the U.S. "isn't as intensely parochial and inward focused," said Leslie Vinjamuri, director of the U.S. and Americas program at Chatham House. That has been a deep concern globally, said Vinjamuri, not only during the Trump years but also throughout the early months of the Biden administration when Washington was not sharing doses despite a massive over-supply.

FILE - Boxes of AstraZeneca/Oxford coronavirus vaccines, redeployed from the Democratic Republic of Congo, arrive at a cold storage facility in Accra, Ghana, May 7, 2021.

Humanitarian organizations applauded the move. Tom Hart, acting CEO at The ONE Campaign, an organization that works to end poverty and preventable diseases, urged other G-7 countries to follow.

"This action sends an incredibly powerful message about America's commitment to helping the world fight this pandemic and the immense power of U.S. global leadership," Hart said in a statement.

"At Carbis Bay, the G-7 will pledge to distribute vaccines to inoculate the world by the end of next year, with millions coming from surplus UK stocks," Johnson announced in a statement.

FILE - Britain's Prime Minister Boris Johnson speaks during the weekly question time debate in Parliament in London, Britain, May 19, 2021, in this screen grab taken from video. (Reuters TV via Reuters)

But it's unclear whether other G-7 members will immediately follow. The countries are at different stages of vaccinating their own populations. Japan and Canada, which have vaccination rates of under 10%, are not in a position to be as generous.

Aside from donating vaccines, the G-7 is also under pressure to waive vaccine patents. The U.S. has supported waiving intellectual property rights on vaccines, the so-called TRIPS waiver at the World Trade Organization. But the European Union is pushing for a different proposal, compulsory licensing to scale up vaccine production.

U.S. National Security Advisor Jake Sullivan told VOA that the different approaches will not be a point of contention at the G-7.

"I anticipate convergence, because we're all converging around the idea that we need to boost vaccine supply in a number of ways," said Sullivan.

The Biden administration knows that Europe will likely hold firm on not supporting the waiver, said Vinjamuri of Chatham House. Getting all the members of the WTO to agree on a waiver is a long and challenging process, it's simply easier to donate vaccines rather than allow countries to produce them without fear of being sued.

White House press secretary Jen Psaki told VOA the U.S. will continue WTO negotiations but would not provide details on whether Biden will put his diplomatic weight behind it at the G-7.

President Biden and Prime Minister Johnson will meet later Thursday. The world will be watching how the two leaders interact considering past disagreements, including on Brexit, the United Kingdom's decision to leave the European Union, which the Obama-Biden administration had opposed.

"The chemistry hasn't been good. President Biden had called Boris Johnson a clone of Donald Trump," said Dan Hamilton, the director of the Global Europe Program at the Wilson Center.

Biden, who is of Irish descent, is also concerned that Brexit could undermine the Good Friday Agreement, the 1998 deal, facilitated by the United States that brought peace to Northern Ireland, which is part of the U.K.

Under the Brexit deal, Northern Ireland remains party to the EU's single market, yet is no longer part of the union, which means a customs border must be implemented. The Biden administration wants to ensure that nothing in Brexit could endanger prospects for peace.

"That agreement must be protected, and any steps that imperil or undermine it will not be welcomed by the United States," said Sullivan. He would not say whether Johnson is undermining the agreement.

Despite these tensions, Biden is very committed to anchoring the G-7 in the U.S. - U.K. partnership, said Vinjamuri. "Really using America's deep and historic relationship with Britain, to affirm the values of democracy, of liberalism, of freedom."

Johnson's government has just concluded an integrated review of its foreign policy strategy, which included a reaffirmation of the special relationship between the two allies.

The leaders agreed to a new Atlantic Charter, modeled on statement made by then-British Prime Minister Winston Churchill and then-U.S. President Franklin D. Roosevelt in 1941 to promote democracy and free trade was instrumental in shaping the world order post World War I.

The 2021 Atlantic Charter underscores that, with similar values and combined strength, the two countries will work together to face the enormous challenges facing the planet - from COVID, climate change to maintaining global security.

Taiwan reports flyover of 28 of China's warplanes over Taiwan

U.S. seen as more of a threat to democracy, than China or Russia

Grim milestone for UAE, 600,000 Covid cases recorded as of Tuesday