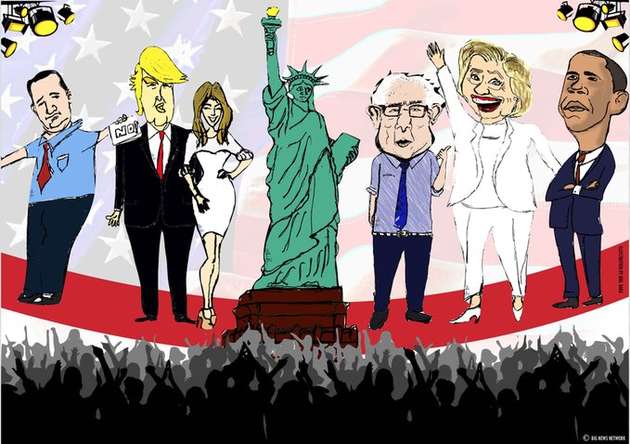 WASHINGTON, U.S. " Now that both the extravagant Republican National Convention and the equally grandiose Democratic National Convention have come to a close, battle lines have been drawn, sides have been chosen and the field is almost ready for the great American political Clash of the Titans - the Presidential elections in November 2016, with Illinois girl Hillary Clinton and business tycoon Donald Trump vying for the White House.

Its now time for voters, left dizzy by the back-to-back confabs, to jump onto either the Trump Train or the Clinton Coach and ride it all the way to the promised new America.

In the wake of the conventions, many analysts and political enthusiasts alike have been drawing side-by-side comparisons between the two confabs - who turned up, who didnt turn up, who plagiarised, who quoted and many other domains of contrast.

Both events boasted a star-spangled (pun intended) speakers list on all nights, with each Party pulling up their most popular supporters to address the gatherings.

However, many of the Republican Partys stars absconded from their own convention, with no sign of past presidents or vice presidents.

Analysts have found that the Democrats speakers list was more racially diverse compared to that of the RNC, whose 71-strong list consisted largely of white, males, indicating an alienation of minorities and women.

The DNC, on the other hand, hosted 133 speakers who were male, female, and also transgender, adhering to their plan to have ordinary, everyday people express their support for Clinton - a move that might be considered smart, especially since the Pew Research Center had previously declared that this years voters will be the countrys most racially and ethnically diverse ever.

The DNC wasnt short of celebrities either, with actors like Lena Dunham and America Ferrera taking centre stage and mercilessly slamming Trump, who had to make do with rather low-wattage celebrities, but made up for that with politically influential speakers.

Both went through the basic routine of their candidature humbly accepting their Partys presidential nomination, pitching their respective running mates and lending them their spotlight to introduce themselves to the nation (Trump for a lesser time to Mike Pence than Clinton to Tim Kaine.)

Another key difference brought up by analysts was the presence (absence, too) of the American flag. The DNC stage was bland and grey, with no hints of blue, white or red present, and delegates were also not sporting star-spangled paraphernalia.

The RNC stage, on the other hand, was filled with Americana, with the flag imposing in almost every photo taken at the convention.

There was a stark contrast between the turnout at the RNC and that of the DNC, as well as in the energy.

RNC delegates seemed more dutiful rather than devoted, and clapped and cheered when required, then went back to their smartphones. There were many empty seats as well - in contrast to the Wells Fargo Arena, where not a single seat was empty during the DNC.

The mood was electric and emotions running high, especially with Clinton backers up against Sanders supporters, and the noise and excitement upon Clintons entry on the final day was dubbed by supporters across the country as a sight to behold.

Delegates were also diverse during the DNC, with nearly 700 pro-LGBT participants, leading LGBT caucus chair Earl Fowlkes to call it "the gayest political convention ever held in this world.

Of scandals and sarcastic challenges

Comparatively, the RNC was a much smoother ride than the DNC, with the latter seeing massive disruptions from supporters of Senator Bernie Sanders that left delegates feeling like they stumbled onto a full-fledged roller coaster of anxiety and slogan competitions.

Eventually though, Sanders managed to calm his supporters enough to formally endorse Clinton, and the rest of the event progressed rather smoothly, leading up to the moment where the positive uproar upon Clintons acceptance of her nomination pretty much drowned out any more, timid, dissenting opinions.

The Clinton campaign was also racked by the email scandal in which 20,000 leaked emails from former Secretary of State, Clintons private server showed party officials favouring her and attempting to undercut Sanders, leading to FBI investigations into Clinton and the hackers, thought to be Russian.

The fallout over the emails also led to the resignation of DNC Chairwoman Debbie Wasserman Schultz.

Trump added insult to injury, but mistakenly drummed up a scandal of his own by sarcastically inviting Russia to find 30,000 more emails that were lost from the server, invoking the Kremlins ire.

His wife too, was in the spotlight for all the wrong reasons - Melania Trump was blasted for lifting two entire paragraphs from First Lady Michelle Obamas speech in 2008, with her speech writer having to take the blame, guilty or not.

Donald Trump Jr. tried to salvage the situation by claiming that President Obama plagiarised his already unoriginal line that consisted of an entirety of six words, Thats not the America I know. Naturally, the claim was brushed off as silly, and a scandal-in-making was averted.

Of course, no political gathering is complete without the exchange of insults, and both conventions were equally guilty of slamming the other Partys nominee, rolling out lines that one would be proud to display as bumper stickers on ones minivan.

However, credit should be given where credits due, and both nominees have managed to plough through their fair share of scandals and drama, where lesser individuals would have slunk off, tarnished and disgraced.

Right from the sound of the opening gavel to the balloon drop signalling a definite close, the DNC outshone the RNC, with ratings going through the roof every night.

The proceedings in Philadelphia trumped the Cleveland numbers on day one, two and three of the convention this week.

Further, Trumps reputation has preceded him as presidential nominee, attracting extra attention like a magnet - a fact fully known to him, which led him to predict that nobody's gonna watch the DNC.

However, using TV ratings to measure success and fix the winning candidate would be folly, given that in the years 2000 and 2008, the party that had the bigger overall convention ratings ended up losing sorely.

Here are the most important ratings over the two weeks summed up:

Opening day: DNC speeches were seen by 26 million viewers across seven channels, as compared to the 23 million drummed up for night one of the RNC.

Day 2: DNC coverage averaged 24 million, against 19 million for night two of the RNC.

Final day: The highest-rated night of the week for both parties, with 33.3 million viewers watching Clintons speech as compared to Trumps 34.9 million, ultimately giving him the bragging rights.

Both parties also tried to take the world of social media by storm, but the DNC saw gains again, with Facebook indicating that the final day of the DNC generated "46.5 million likes, posts, comments and shares" from 12.6 million American users, edging over the RNCs final day, when the site saw 45.1 million interactions from 12.2 million users.

Gauche millionaire or former State Secretary - Why should the world care?

Now that convention season is officially over, the ball is in the voters court to vote for the nominee that they wish to see in the hot seat for the next Presidential term. Theres no doubt that the choice, whatever it may be, will have enormous repercussions both in the U.S. and worldwide across a plethora of domains, including economy, politics and international relations.

Global citizens will do good to closely watch the battle between Trump and Clinton, as well as watch out for the deepening of any rifts (many of which currently exist) within the parties themselves, given that the country is known for taking a stand in almost every global issue.

Further, not only do the nominees policies within the country differ, their stands on topics with international standing vary too - from immigration, to religion, to foreign relations.

Although the effects and their intensity will differ from country to country, it remains important for all to wait with bated breath and see the country vote for the next president of the United States of America - Hillary Rodham Clinton, or Donald John Trump.